There are a few things coming up that may be of interest to various groups in your community:

IPB Insurance has set up a fund which is open to all community or voluntary groups, local clubs or associations, not-for-profit and charitable organisations operating at a local level within the Republic of Ireland.  They are inviting applications for funding from projects which promote social inclusion under the following headings:

Your organisation must be:

If you are interested in finding out more about this fund, go to the website at www.cse.ipb.ie.

Best of luck if your group makes an application.

This event is a great opportunity to showcase your film making skills to a captive audience, meet other filmmakers, and also see if your film wins an award.  So if you’re a young aspiring filmmaker and think your film fits the bill, we’d love to see your work.

A reminder that the deadline for this year’s First Cut! Pop-Up Youth Film Festival in Youghal Co. Cork is now approaching.  The deadline for submissions is Friday, January 10th.

Open to all filmmakers under the age of 21
No Entry Fee!
We are looking for short films in the following categories:

If you, your friends, school, youth club or project, have made a short film and would like to see it on the big screen, then get in contact.
The festival will take place in Youghal on Friday, February 28th & Saturday, March 1st and offers an exciting opportunity for young filmmakers, aged 12 – 21 years, to gather together in a vibrant festival atmosphere for a rare chance to network and showcase their work.
Please fill in the Entry Form carefully and E mail to firstcutfilm@gmail.com.
We accept films that are shorter than 15 minutes in length.

To enter, just send your film on a standard DVD, highest quality possible please! – NOT as a video file! & your completed Entry Form to Cork Film Centre before January 10th and you could see your film included in the 2013 Festival programme.

As well as the screenings of works by young filmmakers, the Festival will also include workshops, performances and the rare opportunity for budding filmmakers to learn from, and engage with, professional filmmakers.  Panel discussions, Q&A sessions and hands-on workshops will take place in the Mall Arts Centre and in a variety of other locations throughout the town during the Festival.

3. A Seminar on Social Media for Social Change 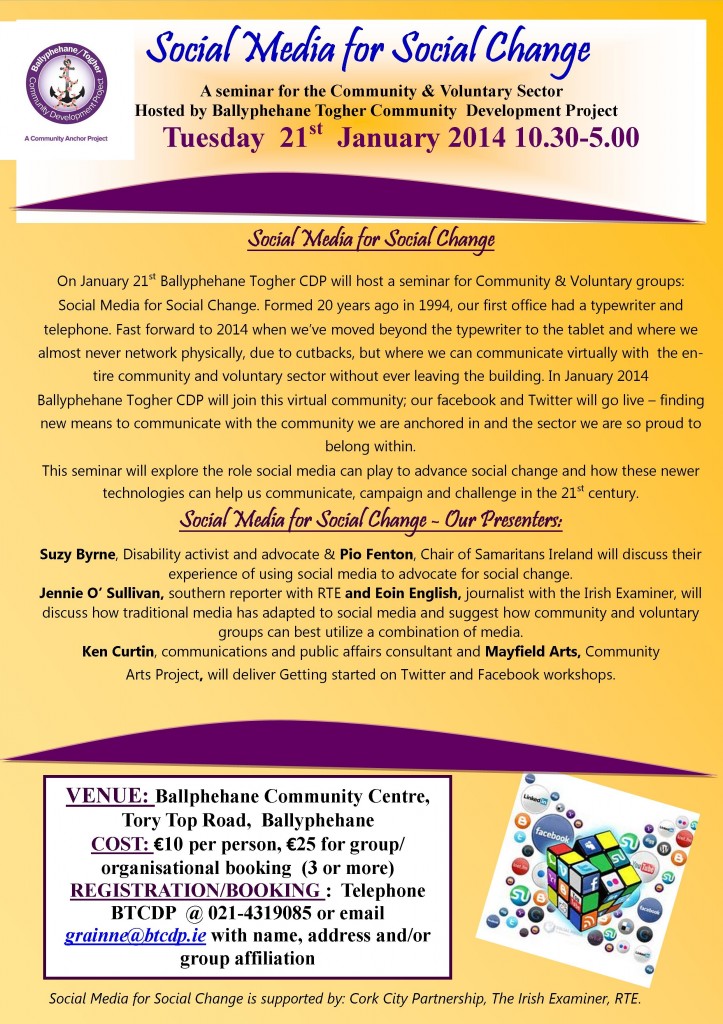