We would like to thank Tony O’Mahony who kindly gave us permission to use the following information and pictures.

You can find more of Tony’s research at www.corkshipwrecks.net

During world War One, the desperate search for an effective anti-submarine weapon was partially met by the airship. These hydrogen-filled lighter than air (LTA) craft were the perfect escort for shipping as it approached the coastlines of Europe. The proud boast of the Royal Naval Air Service during WW1 was that no ship had ever been sunk when escorted by an airship. The strategy of airship patrols was that they were very visible to any patrolling u-boat, which would, out of necessity be forced to submerge. This then reduced the effective speed of the submarine to about 5 – 6 knots which made it impossible to line up an attack on shipping. From the vantage point of the airship it was also possible to scan large areas of sea, in all directions for any sight of the enemy.

During 1917 the toll of shipping losses had become unsustainable to the Allies, especially on the Western Approaches and the Irish Sea. Great work was being done by airships from the stations in Luce Bay in Scotland, Angelsey and Pembroke in Wales, and Mullion in Cornwall. These bases were too far from the south Coast of Ireland for the scope of Western Approach patrols. There was a mooring-out station in Malahide, Co. Dublin, but this only offered basic tethering facilities and no means of maintenance of airships. The decision was made to have an airship base in Co. Cork. 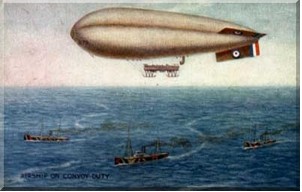 The site chosen was near the village of Killeagh, approximately 20 miles east of Cork City. This area was chosen due to it’s flat terrain, access to water, proximity to Cork Harbour, and most importantly – the Cork to Youghal railway ran along the top of the site. An area of 365 acres, taking in parts of the townlands of Ballyquirke, Knocknaskagh and Ballindinis was commandeered under the Defence of the Realm Act and in 1918 construction began. 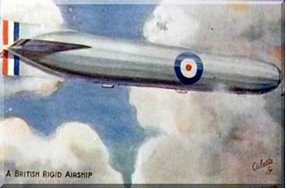 This was to be a ‘War Base’ capable of storing and maintaining two non-rigid Coastal Class airships and two rigid 33 Class airships. This was an enormous undertaking and the presence of the railway was invaluable. A siding was built and a platform erected to take in goods. All of the construction materials came from England to Cork by ship, from where they were transported to Killeagh by rail. Construction was under the direction of the Air Construction Corps, who employed Admiralty contractor Moran. No local labour was used.

Work on the base continued for the remainder of the war and through the Armistice, and was only stopped on the 20th of August 1919. At this point the structures on site consisted of: 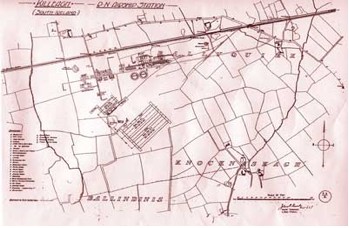 Killeagh Site showing proposed buildings – only some of which were completed

Ireland in 1919 was going through the upheaval of the War of Independence and troops guarding the Killeagh base had a lucky escape in June 1919 when Terence MacSwiney the later Lord Mayor of Cork led an abortive raid to gain arms and ammunition. Meanwhile the unused parts of the large airship sheds were transported back to Liverpool, but all the other structures remained under armed guard until independence. At this point in time the British Air Ministry had taken over the facilities of the Royal Naval Air Service, of which the Killeagh station belonged.

After the formation of the Irish State there was much argument and counter-argument between the British Air Ministry and the Irish Commissioners of Public Works as to who was to pay the rents to the landowners. It was eventually agreed that the Irish Government would take over rental payments after 31st December 1922. The post Civil-War Irish Government seems to have been at a loss as to what to do with the base, which was now suffering large scale pilferage of building materials. The heavy galvanised corrugated iron used in shed construction was especially prized.

In 1938 Killeagh, along with Aghada and Midleton was one of the sites considered for a future Cork Airport. Unconfirmed reports state that a local man was killed in a fall at the site in the 1960’s while removing material from one of the buildings.

Today there are still remains visible of the airship station, with the tall concrete water tower dominating the skyline to the west of Killeagh. Most of the huts have gone, with the concrete footings still visible and the large two story structure is probably the electricity generating plant, used for the production of hydrogen. 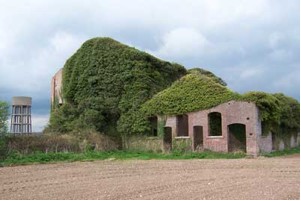 Some of the buildings as they remain today