The Davis family came to Ireland as agents of Capel De Brooke ( Chief Landlord Aghadoe ) in succession to the Hall family and also acquired a large amount of land as intermediate landlords. John Davis built Killeagh House in 1767. His best known descendent was Roger Green Davis. In his early life he resided in GarrenJames. In 1833 he removed several smaller tenants from Dromdihy, converted the town land into a private wooded estate, and built himself a beautiful Georgian Mansion with Doric colums stonework cut by Italian craftsmen. The lead roof gave trouble from the beginning, letting in water. The cost of upkeep was tremendous, and dry and wet rot took over the inner structure. He lost a lot of money in law suits, because of ambitious plans to roadways and mass paths,  and have a grand arched entrance from the main street. He laid out a beautiful walled garden, and a stable of remarkable architectural beauty, especially the limestone entrance arch and the cobbled courtyard. The main farmyard to the estate was at Gortnagoppel (Kellys). 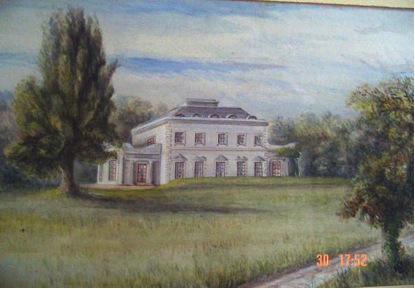 An Old Painting of Dromdiah House

Dromdihy passed subsequently to William Stopford Hunt, who retained possession until 1923, when he sold his interest. The remaining woods were depleted during two great wars. The estate of more than 300 acres was broken down into several smaller lots. The mansion and surrounding 90 acres (mostly wooded) was purchased by John O’ Mahony Berrings. With his brothers he started a manufacturing premises, and a thriving timber enterprise continued in the main street Killeagh, but is now ceased. It passed to Patrick O’Mahony, son of  P.J. O’Mahony. The present owner is Patrick’s son Andrew, who runs the pub.

When Davis moved to Dromdiah he installed his agent John O’Brien in GarrenJames, who later moved to Mountbell, married Ms Garde Castlemartyr. Her nephew (Tom Garde) was a noted athlete – all Ireland runner _ ¼ mile champion 1898-1899, and a member of the famous old Dungourney all Ireland hurling champions in the early years of the 20th century. His daughter, Ms Joan Garde, Burgess married David O’Mahony, Dromdiah in 1944. At this stage the mansion was no longer habitable, where by the roof was removed. They converted the stables and grooms quarters into a dwelling house, and reclaimed the land (under the land reclamation scheme) to mixed farming. Their son Eamon  O’Mahony married to Ms Gwendolyn Ownes, Ballinlough, Cork then took over the running of the dairy farm. They sold their interest in early 2000.

A parallel history of some of the tenants, who had to leave Dromdiah can be read in the Cork Historical and Archaeological Society journal, including the death of Tim Daly in the 1867 relellion. He is buried in the old Church yard in Killeagh.

The Davis family went to South Africa and their descendants have called to see the old house on a few occasions. They told the present occupants some of their history in Killeagh.

We do not know how many families were removed from Dromdiah prior to 1833. Certainly the fields are still known by the names i.e. Kelly’s field, Bruder’s fields (Broderick) and Curtain’s lawn.

Laurence Kelly was killed by police at Dangan fair in 1865 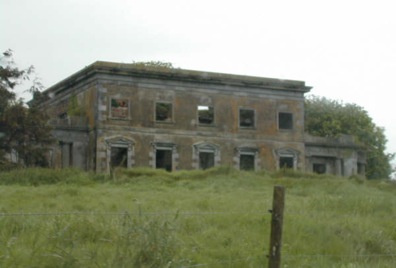 Dromdiah House as it is today 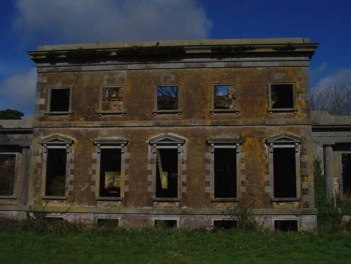 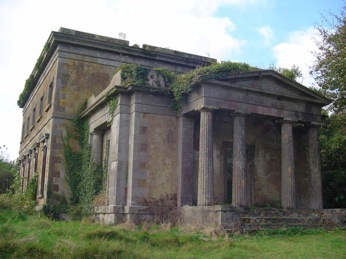